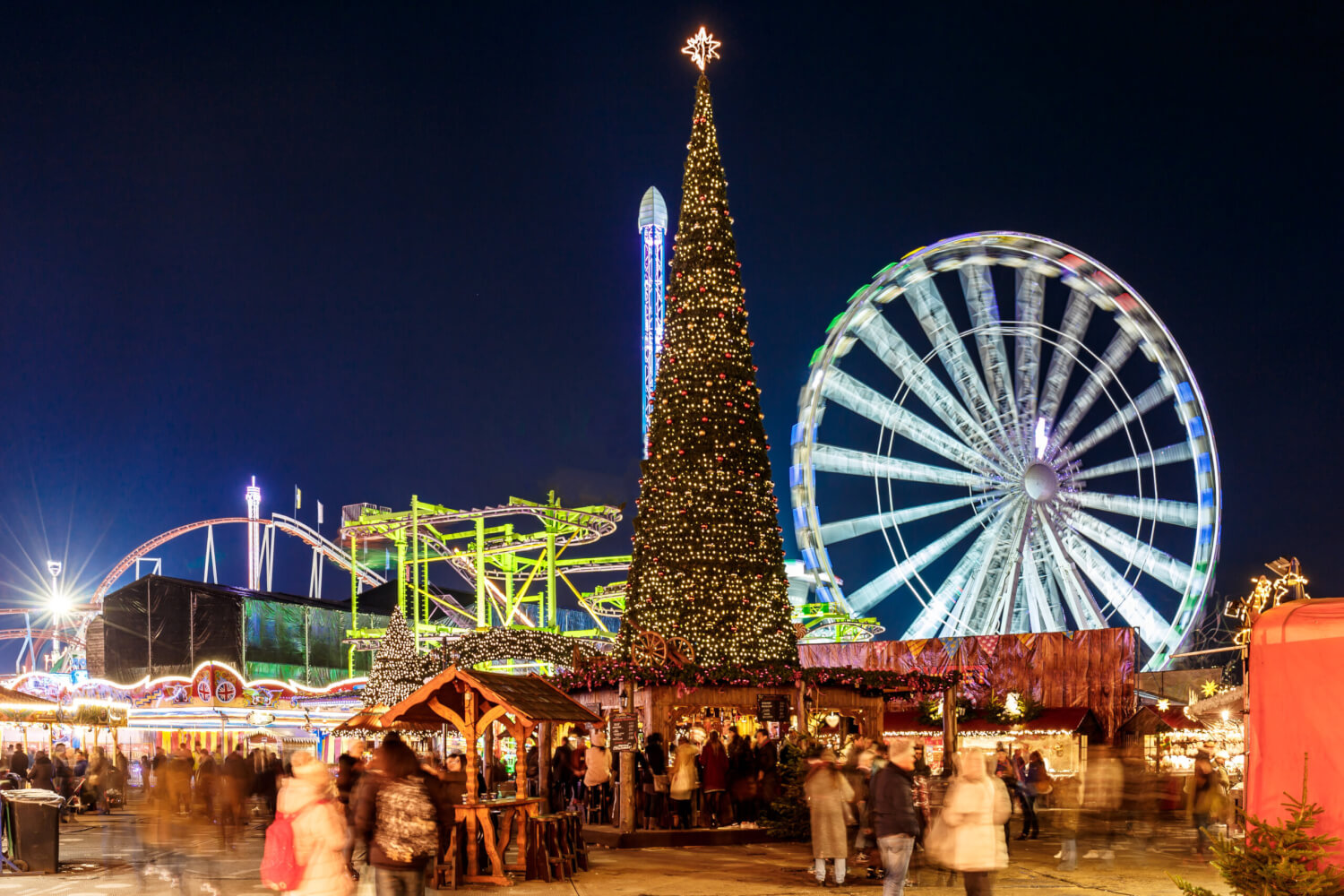 *FYI - this post may contain affiliate links, which means we earn a commission at no extra cost to you if you purchase from them. Also, as an Amazon Associate I earn from qualifying purchases. Check out our Privacy Policy and Disclosure. for more info.

Looking for the best Christmas markets in London? You’ve come to the right place!

Is there anything more magical than celebrating Christmas in London? As a long-time fan of the Christmas film “Love, Actually”, when I moved to London I was most looking forward to all the beauty of the festive season.

So, from the wonders of Hyde Park Winter Wonderland to the magic of the Hampton Court Palace Festive Fayre, here are our top picks for London’s best Christmas markets:

Arguably the biggest and best, Hyde Park Winter Wonderland is much more than just a market – although there are more than 100 market stalls for Christmas gift shopping.

Hyde Park itself is huge, and most of it is taken over by the Winter Wonderland from mid-November until early January. As well as the traditional wooden chalet type stalls (housed in the Bavarian Village), there are also live shows, numerous rides, an ice-skating rink and lots of places to get delicious food or drink.

It’s ideal for kids as well as adults, with some really cool bars including the slowly spinning carousel bar, Thor’s tipi inspired by the Sami people of Lapland and an ice bar!

You’ve probably seen photos from Covent Garden’s Christmas Village because every year there’s a new festive display that everyone wants shots of for their Instagram! A giant Christmas tree also makes an appearance every year, along with some Christmassy Lego displays.

As well as all the gorgeous decorations, the covered interior of Covent Garden becomes filled with festive stalls during the Christmas period. A traditional Christmas village pops up too, complete with mini dining pods in the shape of Christmas baubles!

The streets around Covent Garden are always a prime busker-spotting zone, so you’re likely to see festive-themed performers as well. And all this is not including the daily snowfalls each hour…

Christmas by the River at London Bridge City

Walking along the Thames and seeing the iconic London skyline is an experience in and of itself, but add in Christmas chalets and the magic just gets pumped right up! There’s not many sights more magical than the London Bridge Christmas market.

Boutique vendors set up at London Bridge City, on the South Bank between Tower Bridge and London Bridge. Along with the stalls selling delightful gifts, one of the best parts about Christmas by the River are all the mouth-watering food and drink stalls.

Coming here at night to have something to eat while you wander amongst stalls and Christmas lights, with the River Thames and city all lit up behind you, is incredibly romantic. There are also workshops, tastings, and storytelling events, so it’s ideal for kids or single friends as well.

Heading to Greenwich to visit the markets is always a good idea, but they get amped up at Christmas time with festive stalls, decorations and a series of themed events. There are more than 150 stalls and shops, so it’s a great choice if you’re looking to buy gifts.

If you’re in town in mid-November you should definitely head to the Greenwich lantern parade and ceremonial switching on of the Christmas lights, but any time after is just as magical. The whole ancient maritime neighbourhood is decked out with lights and festive goodies, along with a big skating rink in front of the Queen’s House.

As well as the stalls (which are under cover so you can keep a bit warmer!) there’s an ice-skating rink, live shows at the Painted Hall and, of course, the many museums of Greenwich to explore.

Further down the river from the markets at London Bridge City is the equally iconic Southbank Centre Winter Market. Alpine-style chalets line the sides of the Thames, with twinkling lights strewn above and the massive London Eye dominating the background.

Artisanal goods are on sale along with global cuisine including indulgent drinks and scrumptious street food. The winter market is just a part of the larger Southbank Centre Winter Festival, which also includes a circus, festive musicals, concerts and outdoor art.

This is also where you can find the famous winter igloos beside the river, for a magical Christmas dining experience!

Smack bang in the middle of London, Leicester Square trades red carpet movie premieres for wooden chalets during Christmas time at the Leicester Square Christmas Market. While the market is small it still manages to pack a lot in to the tiny space!

Lights hang from the trees above the traditional market stalls, which sell mainly beautiful crafts and, of course, yummy treats. They also somehow manage to fit a Belgian spiegeltent into the square, where you can squeeze in to see live cabaret, comedy and magic shows.

If you’re in a rush heading for the tube or walking from Leicester Square to Piccadilly Circus and beyond, make sure you take some time to visit this surprising pop-up market!

Nearby, you’ll find another small Christmas market in one of London’s most iconic locations: directly in front of the National Gallery in cozy Trafalgar Square.

Here, you’ll find a mix of stalls selling tasty treats as well as assorted gifts (the organizers are the same as the Leicester Square one, so you’ll find pretty much the exact same selection), but our favourite thing to do here is simply grab a mulled wine and enjoy the atmosphere.

The Camden Markets are totally hip and very popular at any time of year, but, as with most things, the Christmas season just makes everything better.

Camden Market is always a great spot to find truly unique gifts and enjoy international cuisine in the groovy North London neighborhood. During Christmas it’s not just decorations that make it extra festive though, as an ice-skating rink, Christmas grotto and special events are all part of the fun.

Singles can experience speed-dating on ice, while there are some exciting parties and events held in different venues around the markets. There’s even a Festive Vegan Deli event where you can shop for the most mouth-watering vegan delicacies for your Christmas dinner!

For a royal Christmas treat, head to Hampton Court Palace to experience a Festive Fayre the way King Henry VIII might have done! As well as a massive ice-skating rink (that’s always there for Christmas) the palace grounds also play host to many market stalls that specialise in food.

The palace courtyards and grounds are packed with stalls offering the finest artisanal produce, from Christmas pudding, to sausages, churros, brownies and everything in between. There is just as much deliciousness on offer to eat as there is to buy as gifts.

In addition to all this, the palace itself is lavishly decorated (tickets to the market include entrance to the palace), there is live festive music performed on a bandstand, and a Bite-Size Carols event in the Chapel Royal. The Festive Fayre only takes place over a weekend in December, so make sure you book ahead if you want to go.

If you’re craving the kind of beautiful, traditional Christmas market that you might find in Europe, but don’t want to travel outside London, then head to the Kingston Christmas Market (not far from Hampton Court Palace) at Kingston Upon Thames.

While it’s technically a village, Kingston Upon Thames is part of South West London and easily reached from central London by train in about 45 minutes. The village itself is where Saxon kings were originally crowned and is now also known for holding one of the prettiest traditional Christmas markets in London.

The ancient town center is filled with wooden chalets at Christmas, selling beautiful decorations, toys, and handmade arts and crafts. A vintage carousel, roasted chestnuts and mulled wine add to the feeling that you’ve both stepped back in time and somehow managed to find yourself in a tiny village market in Germany – although everyone speaks English!

Christmas Under the Canopy at King’s Cross

The Canopy Christmas Market is open from Tuesday to Sunday from the end of November until Christmas, with special events taking place each weekend alongside the market stalls. We’re talking festive workshops, masterclasses and tastings, along with weekends that focus on craft goods or vegan foods.

Since it’s held in a historic market hall the weather won’t have too much effect on your enjoyment. Live jazz, carol singers, a craft beer bar and a gin bar round out the experience with a relaxing atmosphere for a tipple!

Borough Market is already known as one of the best in London, as it’s a historic year-round food market selling everything from freshly baked cakes to Scottish game or Turkish delight. At Christmas time the famous arches are decorated with Christmas lights, wreaths and more, plus the market has extended opening hours.

As well as the yummy goods for eating on the spot, or purchasing as gourmet gifts, during the Christmas season your shopping will be made extra special by choirs and buskers singing seasonal tunes. The usual edible fare is also added to with Christmas delicacies like mulled wine, Christmas cakes and edible gifts.

Additionally, you can attend some special events like an evening of cheese, where you can learn how to make the ultimate cheeseboard and speak to local cheesemongers for advice on pairings; or the Festive Kitchen, which hosts free demos, tastings and masterclasses with renowned chefs!

Did we miss any of your favorite London Christmas markets?

Let us know in the comments so we can update our list!